Birdless.... but not without experience: Part 1

I returned from my grand adventure yesterday.  The birds brought to hand were disappointing, but the experience was outstanding.  I set out with a goal to collect a bag limit of Sage Grouse, Ptarmigan and Blue Grouse in a single day hunt. Logistically, this is obviously a tremendous challenge as these birds exist in wildly different habitat.  But, that's what makes it exciting, not unlike trying for a salt water grand slam of Tarpon, Bone Fish and Permit.  Over the past several years, my quest has proven to be a fools errand, but it keeps me energetic and gives me a goal to shoot for (no pun intended). 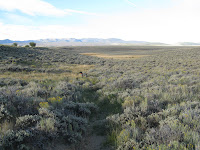 As I do every year, I started my quest with Sage Grouse.  I do this for a couple of reasons.  One, hunting Sage Grouse in Colorado is extremely challenging based on current population levels.  This also sets an immediate tone as to whether or not I'll ultimately be successful in tracking down three species of birds in a single day.  Two, this year the Sage Grouse season was limited to just two days in most huntable GMU's in Colorado, another reflection of how low population levels throughout the state have become.

The idiot (my GSP pup) and I started things off right.  We arrived at the hunting grounds a day in advance with perfect conditions on the horizon for the next morning.  I took a brief look around in the evening and came to the conclusion that it had been a very dry year in my hunting area, which told me the birds would concentrate around a specific patch of sage flat that circled the only measurable water source in this particular vast expanse.  Everything was going perfectly according to plan and I was optimistic we would get things rolling quickly.

The next morning I broke camp before first light and we hit the ground running.  I had a pretty good idea of where the birds would be based on my keen hunting instincts .... and a scouting report I got from a buddy of mine that was there opening day.  As we made our way over to the section of ground I planned to hunt, I was greeted by a number of hunters who all had the same idea as me, eight to be exact, all with dogs on the ground.  It's public land so this is to be expected, but I did find myself wondering how these birds got to be so popular.  With this group working from East to West in a very poor wind direction, my best approach was to start way West and push up wind in their direction in hopes of pinching any birds between us.  As it turns out, I was right.

The birds were exactly where I thought they would be, pushed right to the end of a draw where they could sit quite well protected until they were pressured into taking flight for another country.  I discovered their location as my young GSP was going through an uncontrollable moment of enthusiasm, a sudden jolt out of  mind experience where he determined that he needed to be in another zip code - immediately!  Punching holes in the horizon at break neck speed, hell bent on figuring out where that whistle was coming from up by those spaniels way off in the distance, he blew right through a small family group of Sage Grouse who indeed did take flight for parts unknown quite to the idiots amazement. I still cannot determine which was funnier, the goofy look on my dogs face looking back at me as if to say, "Dad, something really cool just happened.  I don't know what but did you see that?" or the F bombs I could hear coming from the group that had just spent the past three hours pursuing these three birds.  Such is life with a young dog.  To the other gentlemen that shared my experience that morning, I apologize.

The good news:  In that I had blown yet another year in search of my high country grand slam, I could sit back for a few days and simply enjoy the back country.  Next stop, Ptarmigan country! 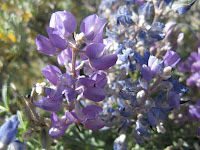 Posted by Gary Thompson at 2:26 PM

I love those grouse! I'm sad to have not been up there this year! I didn't realize they were going to shorten the season until I had my work already scheduled! First year in 14 years that I've missed chasing purple boombers! Our days chasing them with smooth bores are very limited in numbers! It will be a very sad day...

Can't wait for the next installment!

We should sub the Mountian Sharptail in for the Ptarmigan. The older we get he harded it is to hike up to 13k ft!!!

@shawn - It seems we may be facing less days of being able to chase Sage Grouse. It's funny though, I've been running into more and more Sage Grouse in areas where I Blue Grouse hunt. My opinion, albeit unscientific, is that numbers are actually on the rise. Unfortunately, I'm finding them in areas where you're not allowed to shoot them. For a few years now, I've been thinking Sage Grouse are merely changing their habitat rather than disappearing. I suppose the science folks know best.

@Matt - The only trouble with that is that it's just so damn hard to find property to hunt for sharpies. They exist mostly on private property. I'm determined to bang my trifecta one of these years! Fortunately there are a few places where you can just drive up to where the Ptarmigan are. An ATV helps too.