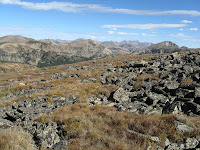 Oxygen is a funny thing.  You hardly ever think about it when you have it, but boy it's front and center on your mind when you don't.  Having blown my bird slam project by missing my Sage Grouse opportunity a day earlier, I was able to really sit back, slow down, and soak in all the majesty of the really high country to do a little poking around for some Ptarmigan. 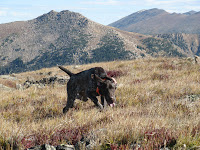 These birds are just plain goofy.  Although we've found them in abundance in years past in this area, you just never know if they're going to show up or not.  The general rule of thumb seems to be, sometimes they're on the peak you're on, and sometimes they're on the peak way over there.  Believe me, taking a stroll through the mountains looking for these birds is definitely a lucky peak selection process or multi-day journey.  More often than not, you just don't have more than one or two of these walks in you, unless you're an iron-man triathlete. 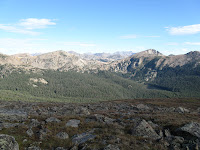 Hunting Ptarmigan is truly one of my most favorite birds to pursue.  They are nothing like hunting their counterparts in Alaska where they largely exist as tundra birds.  Here, they're located at just about the highest point you can find.  There is virtually never any pressure on these birds, the country they live in is breathtaking (literally and figuratively) and the reward is very satisfying if you can locate them.  They're actually very easy birds to kill once you find them.  They hold for dogs great, and even if you miss a shot or two, are super easy to relocate as they never get too far off the ground or flush too far.  They are terrific birds for starting pointers, provided you can hold your dogs attention until you actually find the birds.

One of the primary things you want to identify in your scouting to hunt ptarmigan is a road, a road that will take you all the way to the top of some mountain pass.  This saves you a climb that would just about ruin you before ever reaching the hunting grounds.  Next, you want to find a reasonably long and level peak much like the one in the picture to the left.  This gives you a greater opportunity to actually locate some birds by increasing the acreage you can walk on a single peak.  Ptarmigan live in Colorado in relative large numbers.  Given a little perseverance, and some time spent pouring over topo maps, they're actually easier to locate than most people think. 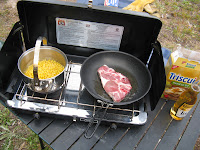 I always enjoy having a big meal before a ptarmigan hunt.  Braised lamb chops are one of my favorites.  High protein is the order of the day for one of these adventures, plus it just makes you feel good.  I can't say enough about the importance of practicing good mountain safety while  hunting these birds.  The area is generally very remote and more often than not absent human interaction.  Of all the bird hunting I do, this is one where I leave my exact coordinates with a my wife and give here explicit instructions on how to find me and when I'll be returning.  As with all high country activities, keep a weather eye on the conditions at all times and get below tree line if things even begin to look dicey.  Carry enough food and clothing to be out overnight in the elements in the event something happens to you, and always take as much water as you can carry, for you and your dog.  I've tried them all and the Quilomene bird hunting vest is the best for this kind of hunting.  It can carry up to six liters of water plus it has a couple of water bottle pockets in the game bag for sports drinks, and it has loads of pockets for food, first aide and extra clothing.  It's almost a backpack.

With a restful night of sleep under our belts, my young pup and I headed up to the pass we were camped on at near first light.  There wasn't a breath of wind and the temperatures were perfect.  High pressure had set in the day before so it even looked as though I would have stable weather conditions for most of the day.  On the outset, I was pretty optimistic, which was probably my first clue that hunting would be terrible.  Remembering the same optimistic outlook I had from the Sage Grouse fiasco a day earlier, I had an inkling to drive up to the pass, snap a couple of photos, and get the hell off the mountain to fish this cool stream I had passed on the way in.  The country was just too beautiful though not to have a look around. 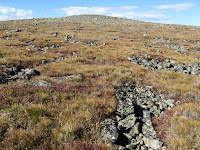 We hiked and hunted for about four and half hours before we both pooped out.  The weather conditions were perfect but the habitat appeared extremely dry compared to years past.  With such dry conditions, I determined there just wasn't enough food source to sustain the birds this season so they probably headed for a better grocery store this year.

Who knows, they may be back next year with better moisture.  Regardless, I know I'll be back to see if they are around. It's just fun to get out there! Posted by Gary Thompson at 3:01 AM

I went 0 for 11 before I found those damn birds! But, you're right...gorgeous country with very little O's!

@Shawn - You betcha! This seems to be my year for weird Colorado birds. I just got my Prairie Chicken special permit. I've seen quite a few of them where I hunt pheasants in CO. So, I'm going to see if I can find them in the early season. We'll see. At a minimum, I'll be able to get my puppy on some wild birds early this year as I'm sure we'll bump into plenty of pheasants while looking for chickens.