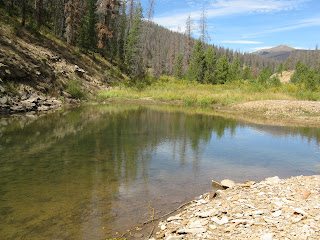 With what started out to be a tough first day of bird hunting, the pull of the river was yanking at my shirt collar pretty good.  Adding to my fishing addiction was the fact that Willow Creek meanders along the last thirty miles of highway on the way to my Sage Grouse hunting grounds.

With an empty bird bag, worn out puppy and wounded pride in the truck, I decided to enjoy my journey between hunting spots with a few leisurely stops along the way to tag a few trout.  I follow one simple rule that has served me well over the years.... never go anywhere without a fly rod. 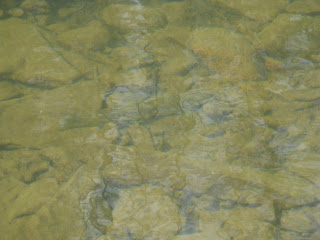 I've driven by Willow Creek dozens of times over the years, always with blinders on heading for Sage Grouse country, but never absent the thought that I should plan time next year to stop and fish or come back with trout as my one and only objective.  Finding myself in the right frame of mind this year to just sit back and enjoy the ride, this would be the year I would keep a promise to spend some time on a new piece of water I've wanted to fish for a long time.  That turned out to be a wise decision.

Willow Creek is a small stream that winds along highway 125, just west and then north of Granby, CO.  It's not a classic piece of water but rather a non-descriptive stretch that most folks don't give a second thought to.  However, upon close inspection you'll quickly discover this river has everything, beaver ponds, oxbows, pocket water, and slow technical pools.  It also has more than it's fair share of riffle water where fish feed ravenously on dry flies during the heat of the autumn afternoons.

About the only thing it doesn't have; a Gortex hatch.  Without giving this beautiful piece of water a glance, the crowds race by to fight for a spot to fish along the upper Colorado units or Williams Fork river.  In fact, I didn't see a single angler on a gorgeous Sunday afternoon along the thirty miles of river I enjoyed, which was just fine with me.

I'm at a point in my life where I very seldom count fish, but it's fair to say the Hardy LRH was being put through it's paces.  By the way, if you haven't had a chance to try the new Hardy Classic LRH glass hybrid rods, you're really missing out.  These rods cast effortlessly and are so sensitive you'll feel every single head thump on the bottom of the stream when you're hooked up.  There's nothing like the feel of glass! 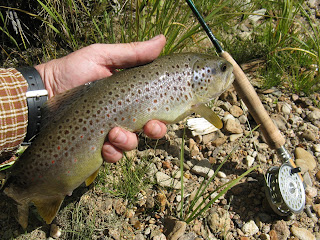 The river has a mixture of beautiful Brooke Trout, plenty of Rainbows and some good sized Brown Trout like the one pictured here that I found sipping on small midges out of the corner of my eye as I was driving by.  Having a keen eye for rings on slow moving water, I hammered the breaks, jumped out, grabbed my rod, and began sneaking through the willows in hopes of being able to get the drop on this unsuspecting beauty.  It took me a few minutes to work my way into a casting position, which I had taken up behind a small grouping of stream side willows and a cluster of downed timber.  When I had worked myself into position, I couldn't help but just sit there and enjoy watching this fish move about carefree and untroubled to every corner of this pool to feed as he pleased.  After a bit, I regained my senses, made a single cast and intercepted him making his way to his next feeding zone.  It was one of those fish.

After I got him safely returned, it was time to make my way on down the road and get over to Leadville to set camp for the next day's Ptarmigan fiasco.  Along the way, I stopped off to fish the head waters of the Arkansas River and a Brookie pond at Fremont Pass.  Although the fish weren't as big as at Willow creek, it was equally rewarding dry fly fishing.  I caught most of the fish here on cinnamon ant patterns and a crazy little dark colored midge cluster imitation called a Crackleback. 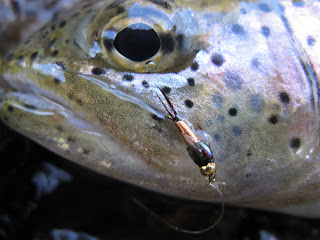 The next day, after my Ptarmigan failure, I figured why break a good pattern; crappy hunting must equal great fishing.  The dog was still sucking O's after the high country adventure and was in no mood for a fishing hike, so I left him behind and found this small little no name Disneyland just before deciding to make my way back to civilization.  It was a short fish in a microscopic stream, but everywhere you expected to see a fish, there was one, all rainbows that were moving up out of a reservoir and all surprisingly large considering the stream they were living in (average size was right at 10"-12").  On a teeny little three weight, that was a handful, not to mention a blast. 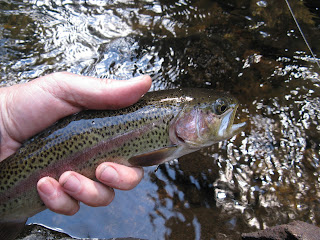 This is pretty much representative of all the fish I caught in this little gem. 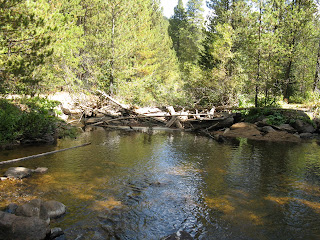 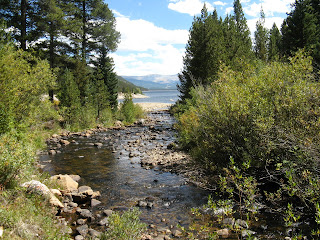 Fall makes for such hard decisions.  On the one hand, I'm always so stoked about the bird hunting that I can hardly think about anything else.  On the other, this is usually the very best dry fly fishing of the year.  Then there's the big game shenanigans that get revved up right about the same time... decisions, decisions.  What's a guy to do?  Blue Grouse tomorrow I guess. 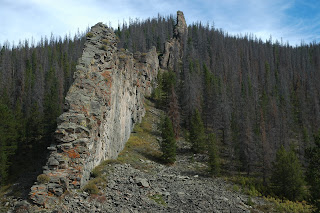 This is just about the craziest rock formation I've seen in Colorado, stuck right out in the middle of no where.

That is sweet! HA! Love how you're easily distracted by nice water...it's a curse and a blessing.

And it was nice to read how you stopped to take in the scene of the feeding brown...the little things that make for a memorable experience.