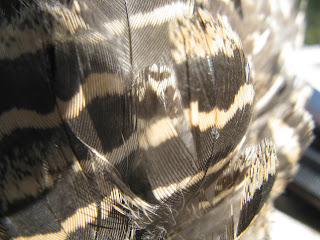 There's just nothing like the long awaited opener of high country blue grouse hunting.  It's always a coin toss this time of year as the dove season opens on the same day.  With a new GSP in tow this season however, it just didn't seem right to take him out to retrieve gray rats so I opted to head to the high country this year and fill his nose with some real birds.  We had what can only be described as a perfect hunt... all sixty minutes of it!  To say the grouse were abundant would be an understatement.  Couple that with an unusually good shooting day for my partner and I and it made for quick work.

My friend Jim had his youngster along for the ride, a spunky little chocolate lab that shows tremendous promise.  Pepper, affectionately referred to as the idiot, had a great time on his first hunt.  I don't hold much in the way of expectations for first time hunting dogs.  As long as they're having fun, don't get injured, enjoy being around the gun, and don't get lost, I consider these trips successful.

On the whole Jim's dog was magnificent.  She demonstrated a willingness to hunt game, flushed enthusiastically and brought most everything back to hand.  The idiot on the other hand was only good for commic relief.  At the ripe age of 7 months, it's pretty hard to take anything too seriously at this point.  He was hunting for something, although I suspect more often than not it was his best friend Daisy.  It was a mistake to hunt them together, but darn it, they were just having too much fun.  Perhaps this weekend, I'll take things a little more seriously.

We got out of the truck at the first Aspen thicket, walked about 50 yards and Jim hit his first double.  After collecting his birds, we walked another 100 yards or so and I hit a double.  With four birds in the bag we decided it might be best to try and locate another family group, so after a few photos, moved onto another prime looking spot.  We got out of the truck, walked about a 300 yards and flushed another family group.  Bang, bang... two dead birds and we were packing camp.  I don't see what all the fuss is about.  This grouse hunting thing is a piece of cake (tee hee!).

This weekend, it's off for a high country grand slam, blue grouse, sage grouse and ptarmigan in one day.  I've never been able to pull if off in one day, bu I've got a better plan this year so we'll see how it goes.
Posted by Gary Thompson at 10:48 PM

Sounds like the perfect hunt! But where's those pics you took? We love to see the pics!