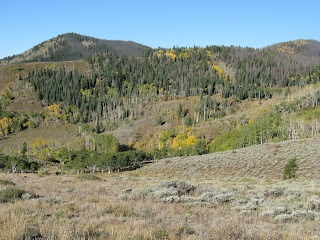 Now, I enjoy being in the moment just as much as the next guy.  You know, just being happy to be alive, watching the dogs work in the field, enjoying the feeling of warm sunshine on my face on a crisp autumn morning, sharing a few laughs with my closest friends as we go gallivanting through the timber or uplands without a care in the world.  That being said, from time to time, I'm ashamed to admit that I do enjoy shooting the occasional bird.

Frankly, it's my opinion, and a noticeable trend, that when a guy spends too much time on poetry, describing the fragility of nature and the wonder of its bounty, the delicate balance between hunter and the hunted and the indelible connection between himself and nature, that he's probably just experienced a pretty unproductive day of shooting.  As example, I offer up my recent anecdotes with regard to my Birdless yet extremely rewarding adventures in the field.  While I feel genuinely enriched by these experiences, in the back corner recesses of my brain, where the wild things are, I was counting the moments until I was able to come back to the highlands and level the scales against my feathered foes. 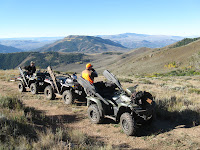 This past Sunday, symmetry was realized ... with a vengeance.  It was time to get back on the horse.  When such a mission is called upon, you turn to your aces, the real McCoy.  Joined by my circle of trust, those who I consider to be the top shelf in all manner of bird hunting pursuits, we headed to the mountains singular in mind and purpose.  The wing shooting was ... well ... magnificent.  Everyone was on their gun, the birds were plentiful, dogs sharply tuned in their attention to detail, and conditions ripe with opportunities for success. 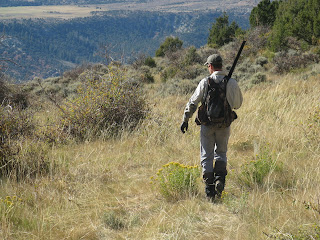 We started the morning at high altitude, 9,300 ft.  With a group of six, we elected to split up and carve the hilltop into sections.  After only a short walk we manged to locate and harvest three birds situated in a stretch of timber that held the four primary blue grouse ingredients, water, aspens, and pine surrounded by immature sage.  As the crisp snap of morning turned to crazy high fall temperatures, it quickly became apparent that we needed to seek shelter from the heat at lower elevations with deep dark hollows filled with shade that centered around water.

Following the typical chin wagging, plan making, standing around gear/dog organizing, and relocation logistics for such a large group of hunters, it was time for lunch.  We retired to a shady campsite near our next hunting site to eat and  burn off some of the afternoon heat.  Renewed and anxious to get moving again,  we headed to a wide section of mountain face that held enough valley fingers choked with timber and shade to feed our appetite for about as long as we were willing or able to walk. 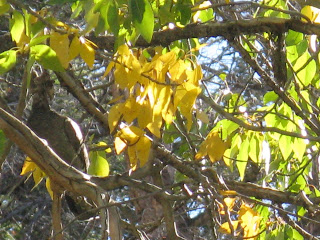 For the afternoon hunt, I paired up with bird man and good friend Matt Otiz, Upland Odyssey , and ten year old nephew and mountain storm trooper Ben, to carve up a section of mountain that had the right look about it.  Keying more on comfort conditions than food source, we headed up a deep dark section of old growth pine that was intermittently dotted with aspen combined with abundant water resource.  The timber shoot was on!

Most hunters of Blue Grouse concentrate their efforts almost exclusively on food source followed by edge.  While this is productive for morning and evening hunts, it is equally important to adapt to conditions and focus on the climate when necessary.  Ever hear a buddy say, "I wonder why we don't see birds in the afternoons.  Where in the hell do they go?."  With temperatures reading 82, and likely higher on the mountain face, we knew the birds would be seeking shelter from the heat and would be concentrated in the deepest darkest COOLEST spot they could find.  We did too, pointing ourselves into a menacing cover of thick pine.  In so doing, we were amply rewarded.

Mia, Matt's Springer Spaniel, was working her butt off and was almost immediately birdy the minute we got into the dark timber.  She put up seven birds all totaled, Matt and I dropping all but a few that curled back around behind us.  Mia brought every bird to hand. 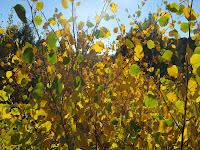 Joined later by friends and dogs from the other side of the drainage wondering what in the heck all the shooting was about, Mia, Razor and French Brittany Elsie put up another group of birds that were harvested and promptly brought to hand.  My limit filled earlier, I was content to sit back, catalog the euphoria, and yes, just enjoy being in the moment. 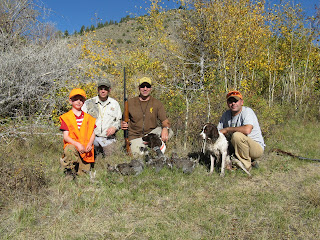 Looks like you guys had a great day. Love those birds this time of year with bird dogs!

Thanks Shawn. Do you know much about hunting Prairie Chickens in Colorado? I purchased a tag this year. I have a reasonably good idea on where to find them having incidentally seen them during pheasant hunts. To locate them specifically, I admit to being at a loss. Any suggestions?

Is that area near Joes open for PC's? I've seen several while hunting ditch parrots! The only PC's I've ever harvested were lessers near Garden City, Kansas.