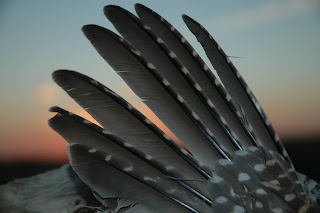 Finally, the long awaited prairie chicken season opened this past Friday in Colorado.  Shootist, and long time hunting partner Scott (often referred to as my girlfriend by my wife) and I headed out to the Sandhill Region of Eastern Colorado to figure out how to locate some of these rare birds.

Between 1973 and 1993, Colorado’s greater prairie-chickens were listed by the state as an endangered species. In 1993, the birds were delisted to threatened and in 1998 they were delisted to a special concern/non-game status. Through DOW recovery efforts, which included cooperative habitat projects with eastern Colorado landowners, greater prairie-chicken numbers have grown from a low of 600 birds in 1973 to an estimated fall population of 10,000 to 12,000 birds, which can easily sustain a limited harvest.

I've been skeptical about this hunt for a while now.  While the bird populations have continued to improve, their numbers relative to the sheer size of the country they inhabit, makes it challenging at best to figure out how to locate them.

It's been my opinion that successful hunting always starts and ends with quality research.  It also contributes to part of the fun.  Talking to landowners, gaining permissions, visiting with biologists from the state, talking to specific area wildlife management officers, doing your home work by hitting the map books and Google Earth pretty hard, and talking with locals to gain a better understanding of specific habitat and patterns are all critical steps in formulating your plan of execution and having success on your hunt.  Social media, blogs and hunting forums have added a few new arrows to the quiver as well that cannot be overlooked.

That being said, the more research we did on this project, and the more local people we talked to, the more I was beginning to paint a very clear picture that we were nuts, and about to waste a ton of boot leather only to end up frustrated, hot, tired and disappointed at the end of the day.  The eternal optimist, Scott kept me focused though.


We managed to locate a landowner that had a particularly large patch of land right in prairie chicken central, if there is such a thing, who was willing to grant us permission to hunt.  I've seen plenty of prairie chickens during past pheasant hunts and have learned that they are nomadic in their habits and have a wide range.  So, finding a landowner that owned a lot of land in prime habitat seemed important to having success as we wouldn't have to piece together permissions from several landowners.

Image via Wikipedia
Most of the early morning hours were spent driving the property and scouting out the land for the afternoon assault.  Not having been to this piece of ground before, we knew it was best to look around and get to know the terrain and property boundaries when it was light versus stumbling around in the early morning darkness.  We spent an hour or so in the afternoon parked on a high overlooking hill searching the sand hills for activity as we waited for afternoon temperatures to cool.  After talking things over, we decided to split up so as to cover more ground and gain a quicker understanding of the land in hopes of learning a few things for what we determined would be a return trip.  A plan was formulated based on a general overview of the topography and some comments we received from the property owner relative to where we might find some birds . We loaded up with as much water as we could carry, and off we went.

Now, I knew this was going to be a hunt that didn't include a big harvest.  After all, the month and a half long season bag limit is only two birds and each must be tagged, just like on a big game hunt. Scott and I agreed that no matter what happened we would each only shoot one bird so we could both enjoy a return trip to the area later in the season. What intrigued me most about this hunt was the land.  The sand hills in the afternoon light are absolutely breathtaking and teaming with life.  As temperatures abated, what seemed like a lifeless desert quickly turned into a zoo, most impressive were the monster mule deer that began to move about as darkness approached.


A few minutes into our walk-about I heard a single shot from the next hillside a quarter mile to my right.  Having hunted with Scott many time before, I was certain a bird was harvested. Silhouetted by the setting sun, girl my girlfriend came bouncing over the top of the hill to share the experience.   I'm not sure I've ever been so proud of single bird taken.


That was the only activity we experienced for quite a while.  As darkness was approaching I figured I needed to get back to the truck while I could still see.  A little before arriving, Scott came running over from another sand hill announcing that he had located some birds about a half mile away, and that if we double timed it we might be able to get to them before the end of legal shooting light.  Needless to say, I left skid marks.  A few minutes later we arrived at the area where Scott had seen the five birds settle from an earlier flush.  We let the dogs search around for as long as we could see but weren't able to relocate the covey.  They are out there though, so it goes without saying that we'll be back. 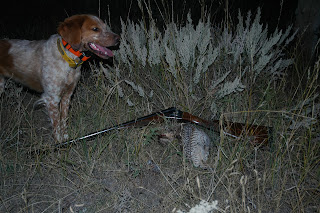 Greater Prairie Chickens are a very tough hunt, hard to locate, difficult to pick apart their habitat based on its generality, and scarce in their numbers.  But, as with all geographic exotic gamebirds, the rewards of success are tremendous.  The preassure is nonexistent and the destination is beautiful.  To the extent you're willing and able, this is one to put on your list.

Posted by Gary Thompson at 4:03 AM

Congrats! Chickens are indeed a difficult gamebird to pattern, I've found... I call it the needle-in-haystack hunt. Glad y'all were able to tag one.