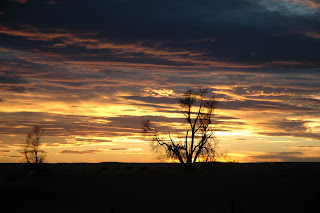 Northeast of where I live, anonymously situated on the prairie near a small town I use as a base of operations for many of my upland pursuits, there is an impressive old barn that stands as a centerpiece among a collection of discarded buildings from a homestead that is decaying into a windblown western landscape.  Sprinkled in its shadows are a variety of old farm implements that decorate the countryside, reminders of a time when life had a clearer sense of priority.  Near the edge of the homestead yard, next to a corner stretcher and a ball of rusted barbed wire is a large dead cottonwood tree currently being reclaimed by its mother.  Buried under the tree are the remains of my two pointers, Phoebe and Chili, who I lost to cancer at the end of last season.

South of the barn, under its watchful gaze and positioned at a lower elevation, lies an oasis of grass, a rectangular section perfectly aged by years of neglect and overgrowth.  It's ideal pheasant holding cover.  The field is surrounded by a number of commercial farming interests, each rotating their crops on neighboring agricultural circles every year.  The field cannot be accessed by a road on any of its sides.  Instead, it is isolated by barren sections of ground and other agricultural edges offering a buffering zone that's just sufficient to discourage poachers from wandering into the field "accidentally," as so often happens this day in age.


The field is under the protective care of a lonely elderly gentleman I'll call Hank, who I have gotten to know quite well over the past decade.  He lives in a modest brick home that was built many years ago next to the old homestead that overlooks my bird paradise.  Hank is a funny and entertaining fellow.  A religious man, he's always quick to offer me a bit a scripture every time I stop by to pay him a visit.  He has an ominous looking German Shepard named Blue that suns himself on the South facing doorstep every afternoon.  Blue has an unapproachable demeanor and ferociously threatening bark that does a terrific job of keeping other hunters from bothering Hank for permission to hunt his property.  Fortunately,  I discovered early on that Blue has an affinity for fresh ground meat which I bring him each week during the hunting season.  My gift renders him an utter pussycat.


Hank has been generous with his property.  We seem to share the same loathing of pheasants, albeit from different perspectives.  While I am tormented by the long tailed jackal for the number of times it has made a fool of me, Hank is annoyed by how early they wake him up in the morning.  I have been permitted to take many friends to the field each season, which I do often.  The only cost is a pleasant conversation with Hank that I look forward to four or five times a season, a few pounds of ground elk, a roast or two, some steaks, and the toll I'm required to pay Blue with each visit.   I have walked this stretch of ground countless times in a variety of different conditions, driving snow, hot dry temperatures, a rainstorm or two, and once, in a perfect fog that left a succulent bouquet of bird scent on the ground for my dogs.  The birds held that day.  Each trip is special and unique in its own way.  I have yet to pay a visit to field and be disappointed.  Sometimes the field ends my day in only a few minutes with three quick shots and a full vest.  More often than not, it takes a little more searching before a quarry is earned, but never has it failed to produce.

Posted by Gary Thompson at 9:35 PM

Gary,
Congrats to you and your blog. You've been chosen as one of this weeks featured outdoor Bloggers on the Outdoor Blogger Network. The announcement post is up and your RSS feed is live on the site. Great Job here and by the way...so happy to see your new page tabs! You did it and it looks great~
Rebecca and Joe

That first pic is stellar! Also, good for you for being featured on OBN! That's where I found you. Nice blog.