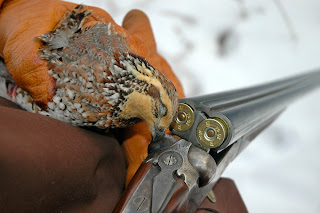 Snow never lies.   It's a commonly accepted notion that when the white stuff falls, late season bird hunting will improve.  In some circles, this might even be accepted as gospel.  I can count many days in my bird hunting memory that include a fond association with bitter cold temperatures, frozen snot-cycles hanging from my beard, and hands so cold that my fingers managed to find both triggers at once.  There's an important outcome that's typically brought on by the alliance between cold snowy weather and bird hunting - a plump game bag filled to satisfaction.... or so I thought.

Kansas is a wonderful place to pursue birds.  I can't say it's the easiest place to fill a limit, nor is it even the most visually stunning location to chase game.  But, it does have a charm that's unique to the small towns that fill its landscape, indifferent to the pace of life that circles its boarders.  It has a robust and well managed walk-in-access program that gives the foot hunter limitless opportunities to pursue a wide variety of game birds, giving you a sense of freedom that only comes from abundant options.  And for the pointing breed man, there is perhaps no other place on earth that quenches a passionate commitment to quietly observe the methodical purpose of a Pointer, Setter or other such staunch creature exercising their birthright.

Earlier this week, I spent three splendid days wrestling plum thickets, rooting through weed choked brushy draws and creek bottoms in pursuit of quail.  With a good amount of snow on the ground from a recent winter storm, I was confident my pursuits would be rewarded with a few birds, maybe even a limit.

I learned a few things about the search for quail in a vast landscape.  They're magicians, here one minute and faint memories the next, leaving only frustrating reminders that they are indeed close by.  A few tracks, an occasional snow melted roost, maybe even a feeding scrape here or there, but count on being able to reliably locate them based on the evidence and you'll be painted a fool. 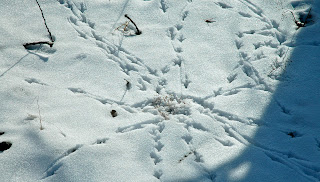 When my hunt concluded, I managed exactly what I originally expected - only a few birds.  We moved five coveys on our first day and I witnessed some truly spectacular dog work.  An untimely spell of poor shooting on my part left the birds in good condition and free to concern themselves with more ruthless predators.  I managed only two birds among a bevy of opportunities.  Our second day resulted in only one covey, but a double taken by my cohort made the best of the challenging conditions.   Bird sign was abundant.  Hopes ran high.  Yet at the end of the day, we were left scratching our heads and kicking the dirt, completely bewildered.  The third day provided a small amount of redemption on my part with two coveys moved and my being able to connect with three birds, all singles after a covey flush - the last shots of the day.

Of all the riches I encountered on this trip, there are two things that occurred repeatedly during the hunt that warrant additional discussion.  One, why is it that after a five mile hike in snow filled crop edges the quail erupt fifteen feet from the truck?  Two, why is the most illusive creature on earth the rooster that gets up when you're expecting a covey of quail?

Posted by Gary Thompson at 8:32 AM

Nice post. Every time I start ranting about moving somewhere with better fishing, I do remind myself that on eof the perks of living in purgatory is its proximity to Kansas bird hunting...

I'll be in Kansas a little later this week with Greg from Mouthful of Feathers and Scampwalker from Eight More Miles. Looking forward to it if the weather holds...

Chad... you're kidding. If you guys plan that next year. Count me in!

Nice post, nice points too! Beautiful pictures. Makes me want to take a trip to Kansas!

That tailgate photo looks like a fine day to me.

Mark - they were all exceptional days. I would have liked to have shot a little better but I've come to grips with the fact that I'm an average shooter at best. This realization has set me free to soak in the entire experience and just enjoy myself. I AM going to invest in some glasses sometime soon though. I appear to be reaching that point in my life.

The pictures really take me there. The dogs running through the field, the birds on the truck, doesn't get much better than that!