Update February 17, 2011:  There was a rock slide on Hwy 50 just West of Cotopaxi  that has closed the highway to through traffic.  We were originally planning to fish around the Texas Creek area and then move back downstream toward Canon City, so we should be just fine.  The weather calls for excellent conditions, light winds and warm temperatures.  We are also going to have a special guest presentation.  Bill Edrington of Royal Gorge Anglers will give a short talk on fishing the Stonefly Molt, the Arkansas in general and some information about tributary systems that are fun to fish during the summer.  Only those that join us will get the top secret info!

My last attempt on New Year's day to lead a Trout Unlimited excursion to the Arkansas River was met with Colorado's first bitterly cold winter storm.  Unfortunately, we had to cancel that trip due to weather conditions.  Well... it's time for round two!

Late February begins a little known Stonefly molt along the Arkansas River that gives the fish an opportunity to gorge themselves on the first significant amount of protein to float down stream in a long time.  Because this hatch is sub-surface, many fly anglers overlook this "golden" stone opportunity.  Given the right circumstances, this event can trigger a massive feeding frenzy and a truly exceptional day on the river.

The February-March Stonefly molt is an excellent time of year to test your Czech Nymphing skills, particularly if you're trying to learn this technique.  The flies you will be using are heavily weighted and large, making it easier to stay in touch with the streambed while you're feeling your way through the freestone bottom.  Short line nymphing is also an extremely effective technique.  Using a combination of straight line monofilement leader and flourocarbon tippet, your fly will drop like a rock to the substructure where you can thump an unsuspecting brown trout on the nose where he's hiding.  The combination of large flies and hungry fish can make for some spectacular takes during the molt.

A 9' #5 rod is perfect for this kind of fishing.  However, if you have a longer rod, say a stiff 10' #4 or even a 11-12' #4/5 switch rod, you will find it easier to reach across seams, keeping more distance between you and the fish and dramatically increasing the length of your drift.

The fly selection will be pretty simple - large (12,14,16) golden stone flies.  When Stoneflies shed their exoskeleton their bodies are milky white to yellow in coloration with hints of brown throughout.  Pennington's Golden D Rib Stone, Morrish's Iron Sally, or Mercer's Biot Poxy Golden Stone are among my favorites for this hatch.  Being the Arkansas, it's never a bad idea to tie on a caddis larva as a trailer.  A loop wing RS2 as a second fly will also fool a few fish it they happen to miss your stone bouncing by their nose.

This promises to be a great day on the river.  As always, if dangerous weather conditions loom, we'll cancel the trip.  Remember to check back at this post the evening of Friday the 18th for any cancellation notices.

We'll depart at 7:30 a.m. Saturday morning from the board of Realtors parking lot as always.  Plan for a 2 1/2 hr. drive.  We'll be heading down to the Texas Creek area and will likely work back toward Canon City as the day unfolds.  Make sure to pack a lunch and any beverages you'd like to bring along or share. 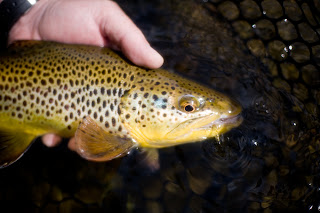 Have a great time, I wish I could join you!

However, if you'd read Mallard of Discontent's latest blog post, you'd see that you, too, are a commie hippie...
: )