Lefty Kreh is by all accounts an undisputed heavyweight famous feather spinner and world class fly angler.  He's one of my favorites simply because he ties so many patterns that are mirrored in my youth.  His patterns are just plain old fishy, not particularly difficult to tie, and they serve a variety of purposes for both fresh and salt water applications.

For reasons I can't explain, I've been bitten particularly hard by the warm water bug this season.  Consequently, I suspect I'll be spending more time on lakes than poking around streams this summer, or at least that's going to be the case during this crazy runnoff.  We'll have to see if old man trout captures my attention when conditions improve a bit.

During my trip down memory Bass lane, I thought I'd spin up a new warm water box and bring a few of my closest blogging friends along for the journey.  Hopefully, these patterns prove to be just as useful as they were so many years ago.  Regardless, I'm sure going to have fun tying them up!  I hope to cover a lot of ground in this series, some old nostalgic patterns, and some new stuff I find particularly intriguing, plus I may even throw in a few brown water inspired personal patterns if the mood strikes me.

The first thing that I find important in fishing warm water species is covering all my bases, or in this case depth levels.  Not unlike nymph fishing for trout, if you're not getting bit, you need to make a change.  Usually the change needed involves an adjustment in depth, though variations in color and pattern size is also important.  Failure to adjust depth is the number one mistake I see new trout-fly anglers make when dragging nymphs through holes, but I digress.

I prefer to carry very few patterns in my bass pursuits, but I concentrate on learning those patterns infinitely well.  In addition, I focus on being able to fish them at varying depths using a variety of different tools in both materials used to tie the pattern as well as rigging necessary to present the fly.  Basically, I want to be able to fish many of my patterns deep, very deep, on the surface, and most importantly just beneath the surface - where small bait is at its most vulnerable and visible.

Lefty's Red and White Hackle Fly is an all time favorite of mine as a fly that tackles the duty from 3" to 1' in depth, although I also have these patterns tied with red and black lead eyes in my box in order to get them deeper if needed.  It is one of the very best small mouth patterns on the planet and will serve double duty as a terrific baby tarpon or snook fly in saltwater around mangroves.  I'd have to guess this might also make a good pike fly when the cold water wolf moves up into the shallows.

The fly calls for a size 1/0 - 4 Mustad S71S.  I prefer TMC 811S for it's wider gap.  Although more expensive, I use saltwater hooks for most of my warm water flies primarily because it inspires me to take saltwater trips.  I mean, I've got the flies ready to go, right?  Might as well go.

This fly does an excellent job as a searching pattern that bridges the gap between deep-running and surface offerings.  It's started with a sprig of flashabou at the mid point of the hook that extends 1 1/2 times the shank length off the bend.  I prefer longer tails and bushy bodies for most flies as I can always trim them at the river, flat, or lake to suit the conditions at the time.  It's pretty tough to add material! 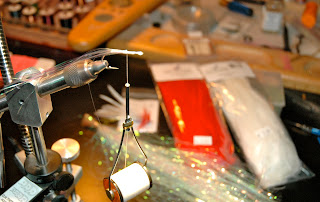 Next, I tie in some white saddle hackle for the tail.  I select between 3-6 feathers per side and tie each side in individually, making sure the tails flares out opposite of one another once attached.  This gives the fly that life like flare between strips.  I peel off the soft webbing from the shaft of the feather, leaving only course rachis and barb near the tip (this is approximately 3/4 length of the entire feather).  Then, I trim the excess shaft once it's attached.  Although not called for in the pattern, I tie in a grizzly hackle on each side of he fly.  This does two things: One, it introduces a degree of contrast which I prefer in most streamer patterns to break up the fly, introducing a wider arrangement of color, giving the fly a more realistic fishy look.  Two, grizzly hackle just looks damn cool! 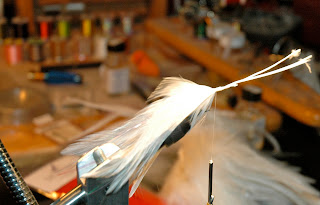 Starting at the mid-shank,  I palmer alternating red and white saddle hackles into the pattern, ending in red, wrapping them forward to 1/8' behind the eye of the hook.  Throw in a whip finish or two and some hard as nails and it's ready to go. 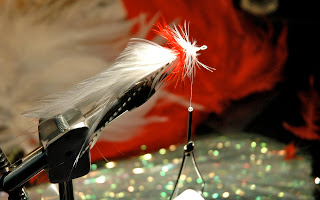 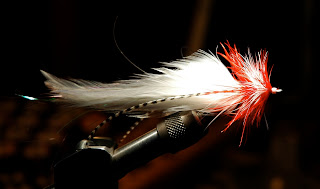 Variations to the this pattern include Chartreuse vs. Red hackle,  adding Chain or lead eyes to achieve different depths, replacing the Grizzly hackle with medium barred rubber legs for light weight patterns designed to be fished at or just beneath the surface.  This pattern is primarily fished around changing structure as a searching pattern.  It's deadly to scoot it from a shallow over the lip of a rapidly descending drop off, or among dead-fall logs or standing flooded timber (tie in some 30 lb mono to cover the hook in order to make it weedless).

Posted by Gary Thompson at 1:54 PM

I may give that one a try.