The Virtue of Small Fish & Rigging for Skip Casts 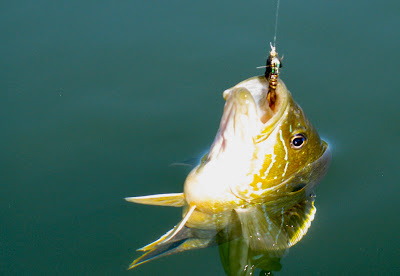 This past weekend I took my son out for a bit of worm dunkin at a local pond not far from the house.  When it comes to fishing with youngsters, there's one rule: slay fish... fast, furious and often.  Copious amounts of blood in the water is just the ingredient to capture finned attention for such an occasion.  We spent an hour or so pulling in a couple dozen Bluegill, some Warmouth, and a few Perch and then decided to head home.

You know that rule about always remembering the fish that got away?  Well, during our outing, while I was tending to my two year old daughter who innocently decided to investigate an ant hill, not realizing those suckers bite, my son hooked up with something significant.  Muted beneath the screaming of my ant covered daughter who had been abundantly wronged by mother nature, I could vaguely make out another discernible scream, that being Zebco drag.  "What's that," I say to myself.  At the same time my son starts screaming, "Hey!  Hey!  I think I've got something big.  Dad, help!"  I leave my daughter instantly to fend for herself to see what's tugging on my son.  I later realize this is sadly NOT a character defining moment in my life.  Thank goodness her mother was on hand to sort out the ant drama.

As I rush to approach my boy, I show up too late; a lost fish that served it's purpose ten fold.  He hasn't stopped talking about it for the last two days.  Mission accomplished!

That fish planted more than one seed though, a renewed interest in visiting my warm water roots had taken hold.  In that moment, I determined that I would be back in a day or two, unencumbered by youngins', and armed to the teeth with a full arsenal of warm water flies.

The pond was littered with overhanging Willows and fallen timber creating the perfect summer shady habitat for shore cruisers.  Time to break out the skip cast rig!  I grew up in the Midwest, bass and pan fishing from one farm pond to another.  Each of these fly traps were wooded with overhanging trees, bushes and other nasties, all with a fierce appetite for flies.  These situations call for a rig I devised as a kid which has now been perfected by Sage in their BASS series rods, the skip cast rig.

This outfit is pretty much nothing more than an overloaded fly rod with a couple of fine tuning customizations added in.  A mid action rod performs best.  As a kid, fiberglass was the bomb!  The goal is to generate an enormous amount of load on the rod using heavily over weighted line and water load from a roll cast.

I expected to find mostly small pan fish in this pond so went with a Winston B2T 3 weight and a #5 weight Rio Grand line.  If I were fishing for Bass, I would use a 5-6 rod and #10 Rio Grand line.  I like Rio Grand for this purpose because the tip section is over weighted with a piece of stepped up line (a #10 would have a #11 tip), giving me a rocket launcher for the tip of my sword.  For good measure, I attach a 2' section of Rio's sinking leader (2.6 fps) to form a tight small surface level loop as my cast approaches the overhang.  Basically, I want the large loop of the roll cast to break down into a smaller directional fly cast loop just as it enters the area of the shore where trees are overhanging.  From a boat, I will make this cast from approximately 30-35 feet away with low trajectory, almost side arm, giving me a compact D loop.  My goal is to get the bug moving at a high velocity and bounce on the surface just before it reaches the overhanging trees.  Then, it should skip just above the water's surface all the way to the shore.  It takes practice and ruining a few holes while you paddle in to retrieve miscalculated casts from trees, but once you get the hang of it, you'll be amazed at how accurate it is, and how easily you can deliver a cast under overhanging trees - where the fish are!

Awesome! Got warm-water plans this weekend with my son, and hopefully, we have some luck like you and you family did.

And what's up with that big ol' trout that snuck in there on ya? Was that a planned catch or a pleasant surprise?

Just beware of the ant hills!

Can't say the trout was planned, just moved to a bigger reservoir with multiple species. He was hanging out in the shade beneath a tree where I expected to find a bass. I'll take it though!