All You Need is a Sense of TU Adventure... 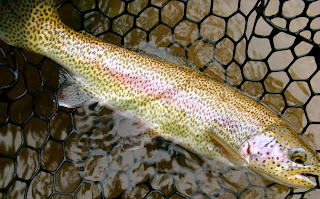 ... And now for something completely different. I've been anxious to wipe the limited options of winter fishing off the agenda and try some more unique spots for our monthly fishing adventures. Finally, spring has sprung and many of the river systems are in terrific shape. We need to get out there in a hurry before the big melt rolls down the hill. I'm craving a bit of adventure this month so will be trying something new. In fact, it's a piece of water I've never fished before. I had hoped to do a little scouting earlier this week, but the weather and some other commitments have prevented my giving it the once over. So, I'm going in blind... just the way I like it!

We'll be heading into a stretch of the South Platte that's a little tricky to access, but once we get in there, we should enjoy up to twelve miles of reasonably untouched water! The section requires a hike around Sportsmen's Paradise opposite Lake George on Hwy 24. Most folks planning a trip to this area are likely to hit South Park or Eleven Mile Canyon which is why this piece of water receives so little attention. The hike in is described as being a little more difficult than that of the Gill Trail into Cheeseman Canyon but not quite as long. I suggest a light backpack to transport your gear and changing at the river vs wearing your equipment for the hike.

The river itself won't be too undifferent from that of Cheeseman Canyon or other stretches of the South Platte around Deckers or even the North Fork. I understand it's a mixed bag of freestone type rocks, some deep runs and a good assortment of riffle water. It's been suggested that a wading staff is a good idea.

This hike is probably not for the faint of heart or those unwilling to get a little off the beaten path. You'll want to plan to bring a good amount of water, unless you want to filter it from the river. I also suggest packing in plenty of food. You'll also want to bring some light weight rain gear as well as an insulation layer or two. I've seen the trailhead before. It heads up at a pretty good clip right out of the gates so trail shoes or like hikers will likely be a good call - NOT FELT.

Should be a fun filled adventure. We'll depart the Board of Realtors parking lot at 7:30 this Saturday morning. The ride down is about 2 hours. With the hike in and out, this will be an all day adventure.
Posted by Gary Thompson at 9:31 AM 0 comments

The spring river, a quiet place, takes a deep breath in a moment of pause between the icy grip of winter and the violence of runoff.  Mother nature is gettin' her thing together, organizing her curio cabinet for a summer display of life renewed.  The river offers a brief window of good fishing, teasing you with bitter brevity before snow melt tightens its grip in a stranglehold that won't let go until summer fishing arrives.

I floated the Roaring Fork River this past weekend.  These are a few images from my experience:

Thanks Dan!
Posted by Gary Thompson at 5:32 PM 9 comments 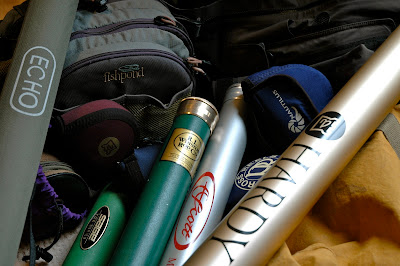 I was reading a post recently on Skate the Fly that offered a few suggestions on getting ready for the upcoming fishing season.  Any fly fishing equipment list of eight non-negotiables that starts with floor jacks and 10 ply tires and moves on to first aide kits gets my vote for hard core - and practical necessity for the back country angler.  I like it! The author is someone I hope to meet on the river someday.

Brand loyalty is the holy grail for marketing slugs, a relentless pursuit to invite the unknowing or weak-minded to participate in a suggestive image - "If you buy this, you can be here or catch this fish too."  It's all BS.

As I prepare for this weekend's adventure, I am compelled to share the sense of excitement and focus I have enjoyed by simply getting ready.  The time spent tuning my lines, building leaders, checking knots, tying flies, changing lines around, outfitting the Watermaster, and checking the fishing conditions daily has been an excellent experience.  If I don't move a fish all weekend, it will have been worth every moment.  Although, I suspect I will!
Posted by Gary Thompson at 6:44 AM 1 comments 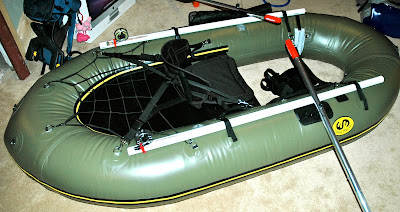 It's been a while since I went on a good old fashion adventure, trying something new by dipping deep into the well of excitement for a taste of enthusiasm dulled by years of sensibility and practical disposition.  I've been fortunate to try my hand at a wide variety of fishing adventures over the years.  I've spent time in the salt on flats boats and deep sea cruisers, wade fished all manner of rivers, been guided in rafts and hard-side boats, spent a month canoeing the Boundary Waters of northern Minnesota and Canada as a boy, and I've even had an opportunity to fiddle around a bit with a jet sled or two.

I've spent many years of my life around boats and have always felt comfortable around water.  Floating fast moving rivers though has been one aquatic activity I have yet to master, although it has always been a dream.  I guess it's the logistics of floating controlled release water that has been a mental challenge for me, not to mention the trespass laws in Colorado.  Two years ago, I decided to conquer the unknown and bought myself a Watermaster raft thinking one of these days I'd figure out how to float our western rivers.  And for the past two years, the boat has sat waiting in my garage until I could find time and a mentor to guide me through the fundamentals.  That time has arrived, and this weekend I will head for the Roaring Fork with a good friend that has spent many days on this river during pre-runnoff.

I thought long and hard about what manner of personal watercraft would serve me best as a Colorado float angler.  In the end, I elected to get a Watermaster because it would handle a good amount of heavy water (rated for class IV rapids), had a very low center of gravity for comfort and stability, and was built strong, able to stand off low water scrapes and bounce off large boulders.  It also had a whopping 650 lb payload capacity in the event I ever took it on a trip to Alaska or BC for an epic float journey. 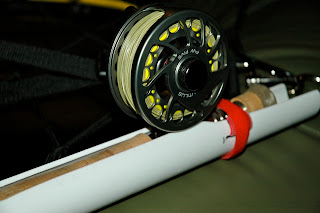 On edge from my approaching challenge and anxious to get started, I made some modifications to the boat today, two rod scabbards, as those who know me well know I've never been one to show up on a fishing trip with just one weapon.  I gained my inspiration from Spey and Switch Rods-Single-handed-rods, in an excellent illustration for making a PVC scabbard that would suite my needs wonderfully.  The end result and boat trim turned out better than I had expected.

The remainder of the week will be dedicated to lining up a new reel, rigging up a streamer rod, spinning up some bugs, planning what gear will be necessary, selecting an angler friendly PFD, loading up boat bags... oh, and maybe some work.  If only tomorrow were Friday!
Posted by Gary Thompson at 10:40 PM 2 comments